Ten Random Things About the Eye of the Storm Series

*This article was originally published on Fiction Fascination's blog (run by Carly) in July 2018, but the blog has temporarily been taken down, so the article has been republished below for readers.
1) There's a scene in book one, Releasing The Wolf, where Lydia's drug addict neighbour shows Brendan how to to break into her bedsit with a credit card. This was taken from something that actually happened to me. I also lived in a 'flat 4' in Guildford, and I locked myself out one day. My "helpful" neighbour (I don't know if he was a drug addict, but I had my suspicions) whipped out his credit card and opened the door for me. Needless to say, I didn't always sleep well at night in 'flat 4'!

2) After I released book one, I had no romance-geared promo ready for marketing the series at all, because I didn't really see it as a romance (despite all the bonding and sex, lol). I always saw it more as a dark paranormal fantasy told explicitly (and humorously in places), which played around with themes love and sexuality, equality in relationships and society, gender stereotypes, and the exploration of breaking free from sexual and societal abuse - all of which could be told beautifully using the werewolf model. Of course, most of this (where the series was going) was not apparent in book one, and when romance readers lapped it up for the Alpha-male roles and the sexually independent female lead (for which I'm so very grateful), it opened my eyes and I literally whizzed up romance promo on the spot and began to market it as paranormal romance. It does cross genres though - very much so. 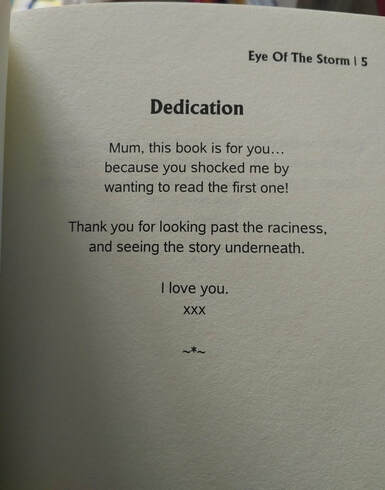 Dedication in Cry of the Wolf (Eye of the Storm), by Dianna Hardy.
4) I get my love of reading from my mum - she would take me to the library every week and patiently wait an hour as I browsed all the books, choosing seven to bring home (I would read a book a day for years). She read the first three books of Eye Of The Storm (yes, including all the sex scenes!), before she passed away, and book two is dedicated to her (photo on left). No, I wasn't embarrassed by her reading it (a little surprised, but not embarrassed) because we were much like sisters in many ways and could tell each other almost anything.

5) I didn't like the character of Selena at all in the first book. As an author, I found it hard to get to grips with her and I was ready to kill her off in book two. But something held me back - if I kill her off, I learn nothing from her; nothing about why I don't like her. So, instead, I spent a large amount of book three digging deep and bringing her character out - I LOVED her after that. I truly loved writing her anti-hero character in all the subsequent books. She parallels Gladys beautifully, and is the other side of Lydia's coin in many ways.

6) Return Of The Wolf, (which ended up being Ryan's story) was probably the hardest book I've ever written. I felt quite shaken at the time with everything that came to light about Rotheram's child sexual exploitation - how, in effect, an entire town could be behind such a horrendous secret (and it came to light on the tail of Jimmy Saville and Rolf Harris, too). It was very therapeutic to get Ryan's background out there, though this wasn't always on a conscious level. Yes, the whole Rotheram mess did inspire his story to a small degree. It was healing for me. But I did feel sick in places while writing from his perspective - I almost vomited twice.

7) I had always intended for Eye Of The Storm to be written in a raw and explicit way, for both the good and the bad, because that kind of rawness GETS to people; it ruffles feathers, which is necessary to create change. What I didn't expect was when, on occasion, it might ruffle the feathers of people I knew personally; not many, but enough to notice a wary look, or sense a whisper... Perhaps they're surprised I can be that dark; think such thoughts... Perhaps they find it hard to separate the fiction I create from the reality that I am. It's thrown me a little because I grew up reading a lot of explicit horror, and I never, ever thought anything about the authors that wrote those books - I just relished in the story and understood it was fiction. It was always easy for me to separate the writer from the book. So, in this respect, Eye Of The Storm has been a learning curve for me. I've had to dig deep for a new type of self-assuredness, because once people [that I spend time with] know what I write, I'm never sure how they'll perceive me if they decide to read it.

8) I set Lawrence's home in/near Pewley Down, outside of Guildford, because I was once walking in those woods one snowy December (I think it was 2000 or 2001), and I saw a HUGE grey fox. I'd never seen such a huge fox, and I'd never seen a grey one before. We crossed paths and both stopped. It stared at me, and I stared back, and we stood like that for a good few seconds; then, it slowly turned and walked away, carrying on in the direction it was originally going, completely unfazed. If it turned out human-to-animal shapeshifters were real, it would not at all surprise me if that fox had been one.

9) Lydia's clumsiness as a waitress is my own! I've held three waitressing jobs in my life and lasted between two weeks and two months in each one. I was truly an awful waitress.

10) No, Lawrence, Ryan and Taylor or NOT based on real men I know (I've been asked this more than once!). Sorry, ladies! They are composites of several people that I know (not all of them male) and also my childhood pet - a Springer Spaniel who was lovable and excitable, but a bit dumb.